“Being queer is a political proclamation! ”
Aditya Tiwari, a 24-year-old award-winning poet, queered his way through life’s ups and downs from the age of 13 to be the person he is now.

Every childhood story is the one which stands by our soul in every season of life and so was Aditya’s. He recognised his queer self just like any other teenager visualized his/her identity. He never had to confront the reality of his existence at any point in his life. However, being in Jabalpur, there were bullies all over the place who made fun of his personality and his every move.  But as he became older, he discovered that he could articulate what he felt and how he felt in words. Aditya was and still is flamboyant and an expressive individual. People would frequently use a complex array of titles, identities, and gestures to try to categorise him that led him to endeavour with his true self. It resulted in him, pretending to be different versions of himself to avoid embarrassment and discrimination.

“It was only in the shadows, where our identities were hidden from the heteronormative world, that we could find comfort and be our genuine selves before the LGBT existence for us in remote areas. “Planet Romeo” was one such app that was just for gays, and it was an escape from reality, which made me form new friendships and explore gay bars too.” he said.  Since then, he has spent nearly ten years negotiating his queerness in the underground gay culture of his small hometown.

“Scream in my mouth and make flowers bloom”—April Lush
It was the first poem, liltingly written by Aditya. The yearning for someone to tell him that they believed in him made him write this piece of poetry. His main goal with his poetry was to identify more genuine queer voices by providing them with the necessary information and a forum where they could speak freely without the fear of being misquoted. Above all, he wanted it to be a piece of work that spoke for himself, which was not told when he was growing up homosexual in Jabalpur.

It was a turning point when he relocated to New York at the age of 17, which made him sense a much bigger, worldwide community. But right after returning to his Indian community, he was attacked in 2017. He said: “They touched me inappropriately, hurled homophobic slurs at me, and when I tried to fight back, one guy slapped me. I found myself so helpless at the time and couldn’t process what I had been through.”
The incident left him guilty, which made him question his identity. It got to the point that every day, before he left the house, he had to decide between safety and authenticity. Despite the difficult circumstances he was in, his family helped him to remain strong. They unconditionally loved him and gave him all the support he required at the time. His sister ended up being his staunchest ally, sticking by him through every challenge.

Aditya’s life had a healthy mix of hardship and triumph over the pandemic phase. Stuck at home in Jabalpur all day long led him to anxiety and depression that had a huge impact on his mental health, deteriorating his physical health as well. Even though it was difficult, he did not let that control him and eventually chose to attend therapy sessions. Unfortunately, that did not benefit him either, which is when writing healed him.

Read More: Defying all odds: This Indian Lesbian Couple Will Melt Your Hearts

Aditya is a makeup enthusiast who loves to travel and has always been passionate about writing and telling stories. His goal has always been to make themes that the mainstream media rejects and frequently gate-kept more prominent.  His poetry has aided him in putting many of his feelings into words and in coping with the internal and external changes in the world. He writes to maintain a healthy balance in his mental well-being and is appreciative of his friends for helping him stay grounded.

For BBC Voices, Tiwari was the first openly homosexual South Asian Indian to broadcast a six-part podcast. Like he stated to The Wire, “It’s startling yet incredible that a platform like BBC Voices has recognised my voice and all that I have to offer – it’s simply phenomenal.” Through his six-part podcast and his poems, he has come to understand that he has grown stronger and more outspoken, which has helped him recognize and value who he is.

In reflecting on his journey, he advises his readers to “Never stop believing in yourself, and never give up on your aspirations. I was told growing up that if I did nothing, I would become nothing. But as time passed by, I’ve come to understand that all I need has always been inside of me. I have ceased in believing my intuition”.

A message to the younger self – “Hang in there, pick your battles and do not be furious”. 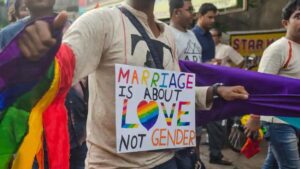 Next post LGBTQIA+ community in India gets new matchmaking app by Matrimony.com, RainbowLuv