An Instagram account which posted comic strips depicting the struggles of gay Muslims in Indonesia vanished from the social media site.

The Indonesian government sent a letter on February 2 asking Instagram to delete the @alpantuni page, saying it violated Indonesian law prohibiting the distribution of pornography. Indonesian officials went one step further and threatened to block the social media platform in the country. But Instagram is denying the claim that they have taken it down.

The Instagram account featured comic strips that showed the abuse and discrimination faced by a gay Muslim character. One comic showed the character being told to “burn in hell” and having feces thrown at him.

Alpantuni first appeared in January with the tagline: “Gay Muslim comics for people who are able to think,” garnering some 6,000 followers during its short lifespan. The Indonesian-language comics dealt with LGBTQ issues in the world’s largest Muslim-majority country.

After the sudden disappearance of that account, Instagram is saying that they have not taken it down. Instagram decided not to comply because it found the account did not go against its ‘community guidelines’.

‘There are a number of other reasons why an account may no longer be accessible, including, for example, if the account holder deleted the account, deactivated the account or changed the account user name,’ Ching Yee Wong, the Instagram’s head of Asia-Pacific communications told the New York Times.

While the Instagram account reportedly did posted comic strips of topless men in bed together but it never featured any cartoon nudity during its short-lived run.

“Materials promoting LGBT are against health rules, religious rules and cultural norms. It is not in accordance with Indonesia,” Communications Minister Rudiantara said.

Muhyiddin Junaidi, a representative of the Council of Ulemas, a group of Muslim scholars, told The New York Times in a telephone interview, “For us, being LGBT is a psychological illness that needs to be cured, and this comic is promoting it.” 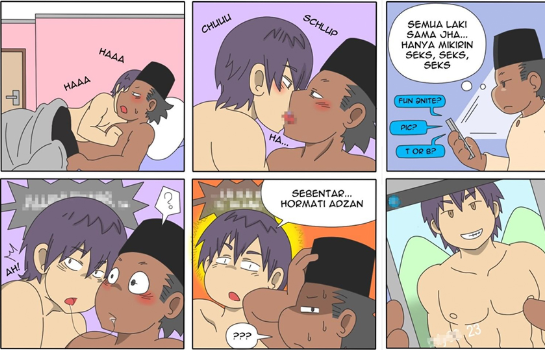 But LGBT activists are not happy the account has disappeared. They are saying that, by allegedly removing the account, Instagram ‘has caved to the growing repression of LGBTI people in Indonesia’.

‘This account did not publish pornography, as the government claims. It did nothing other than publishing harmless illustrations featuring a character’s daily life, including references to his sexual orientation,’ said Usman Hamid, Executive Director of Amnesty International Indonesia.

In recent years Indonesia has shown increasing hostility towards its LGBT community. Last year, Blued, one of the world’s largest gay dating apps – was pulled from Indonesia’s Google store in response to government demands.

Two gay men were also publicly caned – receiving 85 lashes each in Aceh last year. The pair, aged 20 and 23, had been found in bed together.