The lesbian identity is perceived as an attack to the patriarchal Indian society which largely bases its moral structure on the repression of female sexuality.

According to a study conducted by TISS in 2005, an Indian woman identifying as lesbian was directly linked to violent reactions. It also doesn’t help when extreme right-wing groups like the Shiv Sena make statements such as: “If women’s physical needs are fulfilled through lesbian acts, the institution of marriage will collapse and the reproduction of human beings will stop.”

The depiction of queer relationships in media works as an agent of social sexualization and is particularly more influential in the Indian society where sex is not discussed, even for educative purposes. When queer relationships are presented under the scrutiny of heteronormativity, there is a skewed portrayal, an attack on the identity of the queer individual, most strongly shaping the minds of children and the youth. This depiction also has profound implications on the ongoing fight for constitutional rights for the queer citizens of our country.

“From utopian ideals to dystopian nightmares, the narratives we create about ourselves colour our visions of our futures.” 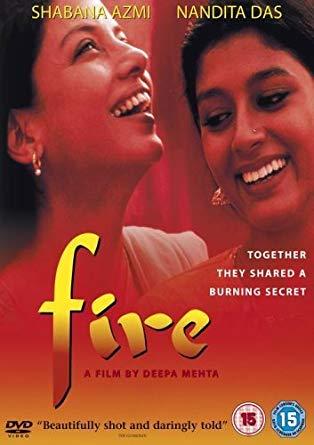 There have been several representations of lesbian women in India, with some of the most popular being the film Fire (1996) and the play Mitrachi Goshta (1981). Although they presented female sexuality less provocatively than most Indian media and were quite progressive for their times, they still correlated lesbian relationships to failed heterosexual relationships.

For the purpose of this study, several short films on Youtube and popular ads were analysed, to identify the most common stereotypes in the depiction of lesbian relationships, which are:

The lesbian woman is often depicted as an outsider or deviant, struggling to be accepted in mainstream society. While there is a sincere need for acceptance, this need extends to more than just to pacify an individual identity crisis, there is an expectation of human understanding from the rest of the community. To paint a woman as sorrowful and depressed as a direct result of being lesbian is wrong. Rather, the focus needs to be targeted at what aspects of society are contributing to mental health issues.

The lesbian couple is portrayed through a heteronormative perspective, with one partner assumed to have a masculine identity or appearance and the other as feminine. In the case of the short film ‘Tomboy’ (2018), the title itself is misguiding in that there is no real tomboy character. One of the partners tries to make up for the troubles faced in the relationship by cutting her hair and adopting a manly appearance, problematically signifying that a lesbian couple cannot survive unless one of the partners assumes a male identity.

By representing queer women as vindictive and a threat to the traditional family structure the media contributes to the regressive perception of the community. In the short film ‘Mamta aur Sarika’ (2017), two lesbian friends plot to expel Sarika’s husband from his own home in the hopes of living together as a couple. In another short film ‘Missing’ (2017), a lesbian relationship is represented metaphorically with a cigarette, seeming to convey that queer sexuality is a vice rather than a normal sexual development.

The lesbian couple is depicted as being overly sexual or fetishized or there is no reference at all, keeping in lines with the subdued sexuality prescribed by Indian patriarchal society. In Tomboy, one of the partners tries to justify her infidelity, citing that she is a “bisexual”, suggesting that a bisexual woman is incapable of having a monogamous relationship.

This skewed representation of lesbian women in the Indian media can be reduced by adopting a lens of film criticism that is developed to uniquely focus on the representation of the queer community. When judging if a particular film is appropriate, there must be certain questions posed:

What is the source of the media?

With multinational corporations recognising the value of the “pink currency” – the purchasing power of the queer population in India, there is content being produced that is driven by an economic agenda. An ad by Myntra (2015), conceptualised by Ogilvy & Mather was criticised by some LGBT activists for its portrayal of an elite lesbian couple who are shown to be living comfortably – a long stretch from the harsh realities faced by most Indian queer women.

Whose voice is being represented?

The message that is conveyed through media is strongly shaped by the voice behind the message. An important factor to be considered is if the voice is that of a member of the queer community, an ally or an outsider such as a multinational corporation or media house.

How does the message reflect on the queer community?

It must also be understood if the narratives portrayed are reflective of an individual experience or representative of lesbian women in general. If humour is used to convey a message, the angle that is adopted must also be considered, observing that the identity of the queers is preserved.

There are also progressive films made about lesbian women in India. Anthadi(2017), a Malayalam short film through its portrayal of a young lesbian couple discussing their tensions after coming out also works as a discourse on the nature of stigma against queers and adopting a positive approach towards reducing this stigma.

Unlike most of the content that portrays queer women as fragile and desperate for acceptance, it shows two young girls who are insightful and strong but with worries like any real person. A Youtube series – The ‘Other’ Love Story(2016) depicts a young lesbian romance and the problems that they face like a normal relationship, without painting it as a fetish or prescribing gender stereotypes.

An ad by Fastrack (2013) portrays a lesbian couple confident about their identity and ready to take on the world, with the message – “Come out of the Closet : Move On.“ An ad by Virgin mobiles (2014) also effectively portrays a lesbian teenager in her attempts to come out to her parents.

By promoting content that depicts women as multidimensional characters who are lesbian, as opposed to characters whose identity is solely dependent on their lesbian sexuality, the Indian media can play a crucial role in the social revolution against homophobia.

One thought on “Lesbian Love And The Indian Film Industry”