The advertisements all seemed innocuous at a glance. But they were all blocked by Facebook.

A ribald sendup of fairy tales hosted by a comedian in Los Angeles. A Spanish-language social group for Latino men, sponsored by a community centre in Las Vegas. And a list of senior-friendly housing options distributed by a nonprofit group in Texas.

Facebook’s system, which uses automated and human monitors, determined that the advertisements were “political” thought they did not involve advocacy or any explicitly political views.

The common thread between them all? LGBT themes.

The Washington Post found dozens of advertisements mentioning LGBT themes and words that the company blocked for supposedly being political, according to a public database Facebook keeps.

The rejections, the majority of which Facebook told The Post were in error, underscore the company’s challenges in regulating the massive amount of information flowing through its service, an issue that burst into the fore after the disclosure that Russian-state actors used advertisements on FB to sow discord during the 2016 U.S. election. But they also touch on a deeper tension as the company seeks to better regulate political uses of its platform. Though Facebook has taken pains to appear neutral, the censorship of LGBT ads, however inadvertent, points to the company’s difficulty in finding a middle ground in a tense national climate where policy increasingly hinges on fundamental questions about race and identity.

Many LGBT advertisers told The Post that they were upset by the way their ads had been targeted by the company.

David Kilmnick, the chief executive of the LGBT Network, a Long Island-based nonprofit, said his organisation has seen about 15 advertisements blocked as political since the spring or early summer, around the time that Facebook officially changed its policy. That was when the majority of the dozen or so organisations and people interviewed by The Post said that they began to experience issues with LGBT content.

Kilmnick said he was at first confused about why the group’s advertisements — for events such as the Long Island Pride Parade, a beach concert, a pride-themed night at a New York Mets baseball game and a LGBT youth prom it puts on — were blocked. But as the rejections began to pile up, so did Kilmnick’s suspicions.

“We were completely targeted simply because we were LGBT,” he said, “for what we’re advertising — ads that promote our programs that help support the community and celebrate pride. There’s nothing political about that.”

Marsha Bonner, a motivational LGBT speaker, described a similar experience when an ad of hers for an NAACP-sponsored conference about the state of LGBTQ people of colour was blocked in July, a first in years of advertising on the social media platform.

Other ads The Post found that were blocked for political reasons included a clothing company for survivors of sexual assault that advertised that its clothing “empowers men, women, gender-neutral”; a promotion for the ride-hailing company Lyft to raise money with the San Diego LGBT Community Centre in advance of Pride Week; an LGBTQ night at the Santa Clara County Fairgrounds in California; and an LGBT-themed tourist expedition to Antarctica.

Facebook declined to explain how the filtering process works and how much of the filtering was driven by algorithms rather than human monitors.

Facebook’s new policies require those seeking to promote posts on political topics and candidates to register with the company and mandate that the ads include information about their funding, or the advertisements will be blocked. If these companies had taken the steps to register as political entities with Facebook, a process that requires a driver’s license or passport, a personal home address and the last four digits of a Social Security number, then the ads would have been permitted.

But many people The Post spoke to said they didn’t know they had the option to register. Others said that they felt registering as political would be dishonest to their organisation’s mission. And most questioned the meaning inherent in requiring an LGBT group to register as political on the basis of such an existential question about identity.

Some of the groups said they were wary of providing their or other employees’ personal information to register with Facebook.

Overall, confusion about the social media network’s process made the problem more unsettling. Facebook’s policies spell out some of the reasons it flags ads on hot-button political issues, but the list — which includes subjects such as abortion, civil rights, guns, Social Security, the military, terrorism and taxes — says nothing about LGBT culture.

Facebook said that this ad, for a LGBTQ+ night at a county fair in Northern California, had been wrongly blocked for being “political.” (Facebook image) (Rosenberg, Eli)

The experience of Thomas Garguilo, a retiree in New York who operates a page dedicated to the history of the Stonewall Inn, a national landmark, reflects the company’s confusing treatment of LGBT-themed ads. Garguilo said that so many of his ads have gotten blocked by Facebook that he has stopped using the words “LGBT” or “gay” in his language on the service.

“It’s ludicrous. And Orwellian,” he said.

His frustration turned to anger after he wrote the company about an ad that he wanted to run, a post about a panel discussion with an LGBT radio station in Washington, on the history of Stonewall. Without the audience that would have come from paying Facebook to boost the ad, the post had been shown to only 156 out of his Stonewall Revival page’s 3,000 followers.

A Facebook employee in the company’s Global Marketing Solutions division wrote him back to explain why the company viewed the ad as political.

“Thanks for the email now after reviewing the screenshots you have provided, it mentions LGBT which would fall under the category of civil rights which is a political topic,” the Facebook employee wrote back, according to copies of the correspondence provided to The Post. “You would need to be authorised to run ads with this content.”

Another employee confirmed Facebook’s decision in a follow-up email, also telling Garguilo that the company considered “LGBT content” to be political. 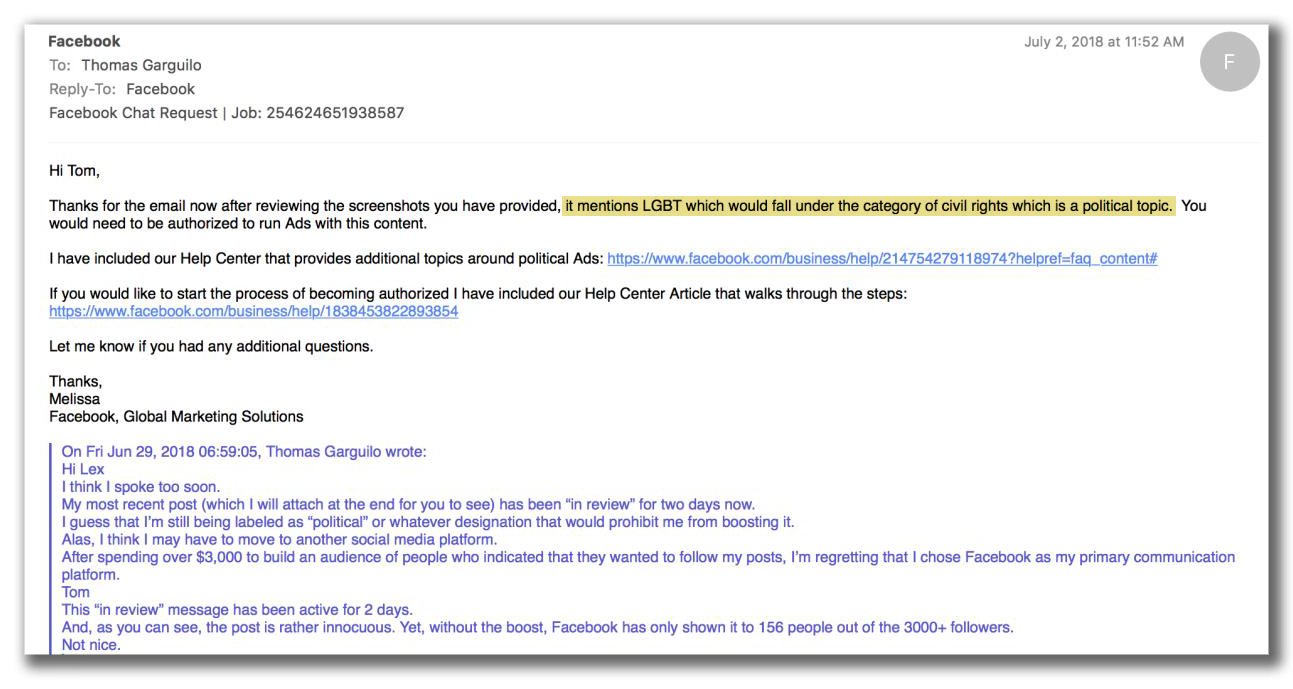 In an email response to an inquiry from The Post, Facebook said that the majority of the advertisements cited in this story had been wrongfully blocked, but it declined to explain why they had been filtered in the first place. It said that it was not intentionally blocking LGBT advertisements.

“The ones that were incorrectly labeled have been removed from the archive and we apologise for the error,” the company said in a statement distributed by spokeswoman Devon Kearns. “We do not consider all ads that relate to LGBT under this policy, but rather only those that advocate for various policies or political positions, which several of these ads do.”

Kearns also offered an apology to Garguilo but did not explain why the company had sent him the same response twice. “We apologise for the confusion we caused this person by incorrectly telling them their ad was political,” she said.

The ad, for a screening of “Selena” from the Los Angeles LGBT Center, was also determined to be “political.” (Facebook image) (Rosenberg, Eli)

There are signs that Facebook’s political filtering has spread to other ads that refer to identity groups. These include an advertisement for a trash pickup at a riverbed in California that noted: “Maybe you are Caucasian, African American, Native American, Latino, Asian, Two-spirit. Maybe you are Christian, Buddhist, Muslim, or atheist.” (Facebook told The Post that it filtered the ad because it briefly mentioned a 50-year-old piece of environmental legislation, the Wild and Scenic Rivers Act.) Other ads apparently hit by the filters include a celebration of Nigerian Independence Day in Houston, a “Taco Tuesday” at a Mexican restaurant in Florida, a street fair in Chicago with “Mexican and Latin” street food and a post with facts about Holocaust diarist Anne Frank.

Other groups have also complained that they have been unjustly targeted by Facebook’s political-advertising restrictions, including nonpartisan veterans groups and news media companies, many of which may write about and cover political issues but are not politically affiliated with any group or cause. And some clearly political ads — including those for senators and advocacy groups — have made it through without being flagged.

Facebook initially determined that this ad, for a “Taco Tuesday” at a Mexican food restaurant, was political. (Facebook image) (Rosenberg, Eli)

Theresa Lucero, a coordinator at the Community Counselling Centre of Southern Nevada, a Las Vegas-based nonprofit that offers services such as HIV testing and counselling, said that the group has been having particular trouble getting ads approved, for things such as a gay social group it organises, if the advertisements are in Spanish. When it has posted the same ads in English, they’ve gone through, Lucero said.

Kelly Freter, the director of marketing and communications at the Los Angeles LGBT Centre, said the organisation had seen seven to 10 ads for events and awareness campaigns blocked since mid-June.

“We can’t get a clear answer about why things are being blocked or someone to follow up with us about how we register as an organisation,” Freter said. One of the centre’s blocked ads that was reviewed by The Post was an invitation to celebrate the life of singer Selena Quintanilla-Pérez with a screening of the movie starring Jennifer Lopez.

“The bigger concern from us is that we’re unable to reach people in the community,” Freter said.

Kearns pointed to the company’s work with the LGBT community, noting that about 8 percent of Facebook employees have identified as LGBTQ in a survey. The company has given users the option to select genders beyond male and female since 2014, and it joined amicus briefs filed with the Supreme Court in 2015 to support the legalisation of same-sex marriage. Facebook also works with advocacy organisations to address issues such as anti-LGBT bullying.

Many of the groups’ administrators said their experience had given them a sour impression of the company, though most said there were few alternatives for getting their message out to wide groups of people. Next post VIDEO: Sikh Mother Of A Gay Son Explains What Homosexuality Is To Parents